On January 9, 2011 Robert Berry entered D.W.’s residence without permission armed with two firearms. Berry was waiting for D.W. inside the residence when she returned home from church and shot her multiple times in the head and upper body. After a struggle, D.W. was able to escape to a neighbor’s house for help. Berry’s prints were located on evidence collected at the scene.

Robert Berry fled the state and was arrested in Arkansas on January 13, 2011, following a brief pursuit by police. Investigators located women’s clothing, a woman’s wig, and an atlas inside the vehicle Berry was driving. In addition, Robert Berry had altered his appearance by shaving his head. Investigators also located a pair of blood stained blue jeans in the vehicle belonging to Berry that were submitted to the Missouri State Highway Patrol Lab in Springfield for DNA analysis. That analysis determined the blood on the jeans to be consistent with the victim.

OZARK, MO – The Christian County Prosecuting Attorney’s Office announced that on February 24, 2015, DUSTY A. STEVENS DOB: 10/16/1992 formerly of Buffalo, MO pled guilty and was sentenced by Special Judge Blankenship. Stevens was set for jury trial on February 25, 2015. On February 24, 2015 Stevens decided instead to plead guilty pursuant to a plea agreement to three counts of statutory sodomy in the first degree.
All three counts involve the defendant having deviate sexual intercourse with a nine- year-old girl. The acts occurred between February 6, 2010 and November 23, 2010. The offense occurred in a residence in Sparta where both the defendant and child were living.
Special Judge Blakenship sentenced Stevens to TWENTY YEARS in the Missouri Department of Corrections on Count I, II and III. All counts run concurrent and concurrently with case number 13CT-CR00751-01. Stevens is currently serving a total of a 20 year sentence in that case for statutory rape 1st degree, child molestation 2nd degree and sexual misconduct of a child.
This case was investigated by Det. Shayne Duryea with the Christian County Sheriff’s Department.

Cheri K. Cobb joined the Christian County Prosecutor’s Office on February 24, 2015. Cheri received her Bachelor of Arts degree in Criminology in 1996 from Drury College, now Drury University. She received her Juris Doctorate from the University of Missouri School of Law in 1999. She began her law career as an Assistant Prosecutor for the City of Springfield, Missouri. Upon leaving the City of Springfield, she opened her own criminal defense and civil law practice. She joined the Webster County Prosecutor’s Office specializing in criminal and civil child support actions, misdemeanors and traffic offences in September of 2010 and remained serving until December of 2014.

She will be handling a misdemeanor and traffic docket. 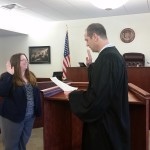 The Christian County Prosecuting Attorney’s Office is pleased to announce the addition of Assistant Prosecuting Attorney Agnes (Agi) Prevendarcsik as of February 23, 2015. She received her Juris Doctorate equivalent from Utrecht University in The Netherlands, and her Masters in Law from Washington University in St. Louis. Prior to joining the Christian County Prosecutor’s Office, she worked as an Assistant Public Defender for seven years. Agi has also worked at The St. Louis Litigation Group, LC., as an associate. While at Washington University, she served as an intern with the St. Louis Circuit Attorney’s Office Sex Crimes Unit. Additionally, she served several years as a guardian ad litem for abused and neglected children. 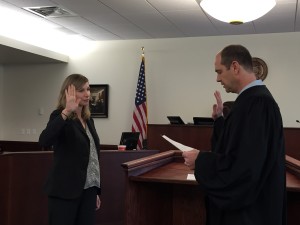 the picture is Judge Bacon swearing her in as Assistant Prosecuting Attorney.

OZARK, MO – The Christian County Prosecuting Attorney’s Office announces that on February 20, 2015, Marcus McDonald, D.O.B. 2-24-1985, was sentenced to serve 7 years Missouri Department of Corrections for the class C Felony of Domestic Assault in the Second Degree by the Honorable Laura Johnson after the Court determined that McDonald violated the terms of his probation. The range in punishment for a class C felony is one day up to 7 years incarceration and/or a fine not to exceed $5,000.