On Saturday October 22, 2016, the Christian County Prosecuting Attorney’s office walked in the Making Strides for Breast Cancer annual 3 mile walk.  The CCPA office had an 8 person team that consisted of Christian County Prosecuting Attorney Amy Fite, Investigator Amy Zacek-Smith, Legal Assistant  Dale Tavares and several supportive family members.  The team members raised money, made donations and walked as part of more than one million volunteers across the country that walk and raise money for the Making Strides Program.   Making Strides Against Breast Cancer walks are the largest network of breast cancer awareness events in the nation, uniting communities with a shared determination to help free the world from the pain and suffering of breast cancer. 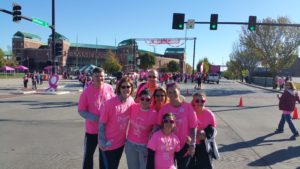 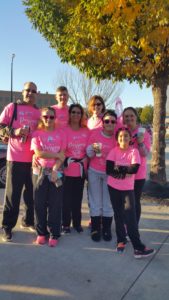 “We are faced with an ongoing dialogue about ways to reform our criminal justice system,” said Fite. However, very few of these ideas involve protecting the rights of crime victims or standing up for the good work that law enforcement officers do every day when they place their lives on the line for us. We must ensure that any changes to our criminal justice system do not sacrifice public safety or victims’ rights.

“Some of these ideas are rooted in myth and must be de-bunked. For example, simply reacting to the myth of “mass incarceration” of the wrong people could result in us opening the floodgates of our prisons and putting violent criminals back on the streets. The facts speak otherwise. We know that just 1% of the criminals in Missouri’s prisons are first-time, non-violent felony offenders. The other 99% are repeat career criminals, violent offenders or probation and parole violators. In other words, Missouri’s prisons are occupied by exactly who we would expect and need to be there. Instead of swinging prison doors wide open and returning violent and career criminals to our streets, we should invest in programs that keep people from winding up in prison in the first place, such as treatment courts that get offenders needed treatment instead of incarceration; diversion programs that replace jail time with things like community service, drug and alcohol testing, counseling, and supervision; swift, certain, and short jail stays for offenders who violate the terms of their probation; and re-entry programs that help prisoners transition back into the community after release.

“Likewise, efforts to ‘legalize’ marijuana rely on the myth that marijuana is harmless or medicine. It is neither. Today’s marijuana is far more addictive than it was 40 years ago, and it is driven by a cash-industry that markets the product to youth, hoping to hook them early as life-long customers. True medicine is tested and approved through the FDA, and there are some promising tests for pain relief and epilepsy going through that process right now. We need to focus efforts on those tests and trust in legitimate, scientific research instead of allowing the promoters of greed and addiction to cash in on our empathy for others.”

Fite has over 17 years of prosecution experience. After graduating cum laude from St. Louis University School of Law in 1997, she started as an assistant prosecuting attorney in Christian County, where she was the narcotics prosecutor and prosecuted a caseload of mainly methamphetamine cases. Next, Fite spent approximately 8 years at the Circuit Attorney’s Office in the City of St. Louis, where she served in the Drug Court, Domestic Violence Unit, General Felony Trial Staff, Gang Unit, and the Sex Crimes and Child Abuse Unit. Fite also spent over two years as the Trial Trainer, where she trained the incoming assistant circuit attorneys in how to prepare and try jury trials. While at the Circuit Attorney’s Office, Fite participated in well over 100 jury trials, including successfully convicting murderers, robbers, rapists and child sex offenders. In 2008, she joined the Greene County Prosecuting Attorney’s Office as the First Assistant Prosecuting Attorney for the General Crimes Unit, where she supervised seven attorneys in a unit responsible for prosecuting property crimes, bad checks, DWIs and traffic related crimes. As the elected prosecutor of Christian County, Fite continues to carry a caseload that includes murders and sexually related crimes.