Ozark, MO – Christian County – Prosecuting Attorney Amy Fite announces that on Monday November 19, 2012 Anna Bunch joined the Prosecuting Attorney’s as an Assistant Prosecuting Attorney. Ms. Bunch received her undergraduate degree from University of Missouri majoring in Journalism and Political Science. She received her Juris Doctorate from University of Missouri School of Law in May of 2007. Prior to joining the Christian County Prosecutor’s office, she worked for the Greene County Prosecutor’s Office where she prosecuted a variety of crimes including property crimes and crimes against persons, and most recently served in the Warrant Unit reviewing the majority of cases that were received into the office and served as a liaison with law enforcement officers. Ms. Bunch has also worked at the Missouri Attorney General’s office handling criminal appeals and motions for post-conviction relief.

Ms. Bunch in her current duties will carry a felony and misdemeanor caseload as well as appear in associate circuit court. She was hired to fill a currant vacancy in the office. Ms. Fite stated, “I am very excited to have Ms. Bunch come and join our office. I believe her experience and work ethic will help us to continue to provide efficient and effective prosecutions for the citizens of Christian County. ” 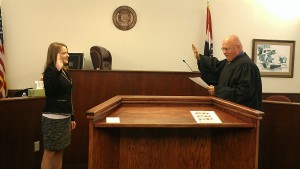 Ozark, MO – Christian County Prosecuting Attorney, Amy J. Fite announced today that KARENA D. SMITH, dob: 09/11/1992 of Tunas, Missouri plead guilty to the class B felony of involuntary manslaughter in the 1st degree and two class C felonies of assault in the second degree. The case was set to go to trial today in Christian County in front of Christian County Circuit Judge Mark Orr. The defendant announced her desire to plead guilty and did so on Friday November 2, 2012. The plea was without a plea agreement with the State other than the sentences for each count would run concurrent with each other.

KARENA D. SMITH plead guilty to driving while intoxicated while driving a car on May 31, 2010 and being criminally negligent when she failed to yield to oncoming traffic which caused another vehicle to hit hers. In the wreck, one of her passengers was killed and another physically injured. The driver of the other vehicle was also physically injured. SMITH had a blood alcohol content of .191. The legal limit is .08.

Ozark, MO – Christian County Prosecuting Attorney, Amy J. Fite announced today that JEFFERY DENTON, dob: 11/22/1967 of Conway, Missouri was found guilty by a jury of the class C felony of stealing and the class C felony of passing a bad check. The case went to trial beginning on October 22, 2012 and the jury returned a verdict on October 23, 2012. The jury also recommended that Denton be sentenced to six years in the Missouri Depart of Correction on each count. 1st Assistant Prosecuting Attorney Donovan Dobbs represented the State.

JEFFERY DENTON was found guilty of giving a check on a closed account to purchase a home in Nixa on September 7, 2007. The account had been closed since 2005. Denton then remained in the home without paying anything until March of 2008. The owner of the home testified that Mr. Denton kept giving different deadlines as to when he would make payments but that each deadline passed without payment.

The defendant was charged on April 9, 2008.  The defendant failed to appear in September of 2009 and a warrant was issued for his arrest. He was arrested on the warrant in February of 2011.  Since 2011 the State prepared for trial on several occasions; however, the case was unable to be tried due to more serious cases taking precedent on the limited jury trial docket.

Formal sentencing is set for January 4, 2013. Prior to sentencing, a sentencing sentence report will be prepared by the Missouri Department of Corrections. The class C felony of stealing and passing a bad check carries a range of punishment of one (1) day to one (1) year in the Christian County Jail or one (1) year to seven (7) years in the Missouri Department of Corrections and/or a fine not to exceed five thousand (5,000) dollars.